A frame drum for the love of cats 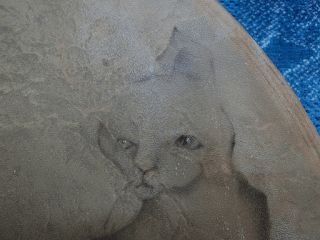 A new drum all about the love of cats.  This Cat Goddess has appeared with one eye looking into the possibility of kitty comfort and one eye looking with a predator's gaze. 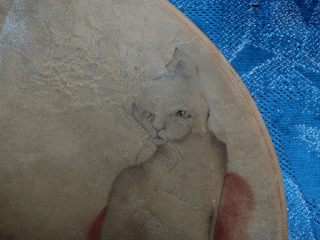 Bast, the Cat Goddess of ancient Egypt, also has this multi-dimensional nature.  She is both a Sun and a Moon Goddess because of her sacred and all-seeing eye.  She is the Goddess of sensual pleasure, protector of the household, bringer of health, and the guardian saint of firefighters. 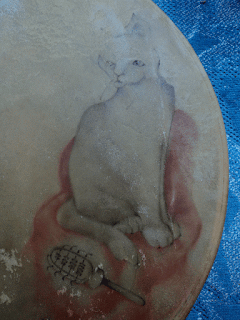 Sometimes she is shown holding a sistrum, a rattle used as a musical instrument in ancient times and associated with Hathor.  Agile and lithe, Bast was recognized as the goddess of music and dance. 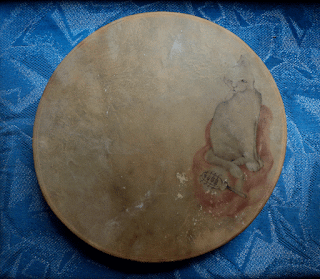 The Priestesses of Bast dressed in the color red, because Bast was the daughter of the Sun God, Ra.  She would ride through the sky with her father, protecting him from his enemies.  And here our Cat Goddess sits atop a Priestess's red robe. 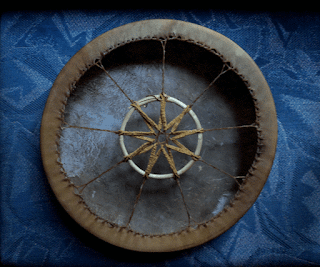 The interlacement pattern tied into the back of this cat drum represents the Ninefold Goddess.  Nine is sacred in Arabic numbers because the digits of every multiple of nine add up to nine again. 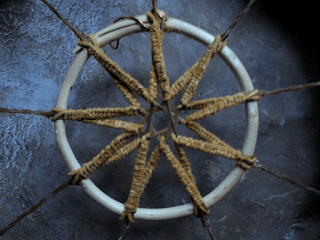 And how perfect for the love of cats, who are said to have nine lives.  This myth may have begun in ancient Egypt.  Atum-Ra, was a sun god who gave life to the gods of air, moisture, earth and sky, who, in turn, produced Osiris, Isis, Seth, and Nephthys.  These gods are collectively known as the Ennead, or the Nine. 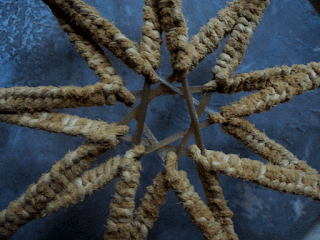 You can listen to this drum being played with a felted drumstick by clicking on this link: https://youtu.be/dWx-yakAXfs

This drum is available for purchase in my Etsy webstore, or contact Kristen at journeyoracle@gmail.com.

Posted by Kristen Scholfield-Sweet at 7:06 PM