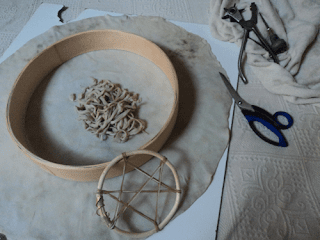 Every part of a drum I make tells a story and while each part is just itself—the wood and skin that gives spirit a body and a voice—each part is also a symbol that means something more. This drum is a custom order using a hard to obtain doe skin and I discovered meaning at every stage. 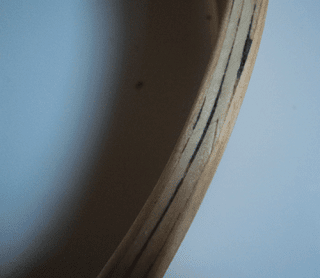 The BC spruce wood hoop is laminated from 4 pieces that represent the 4 oceans, 4 rivers, 4 mountains, and 4 winds of the world—all the bones and blood and breath of this world.  And one of these pieces of hoop wood broke.  The tiny diagonal line will not be noticeable when the drum is dry, but I know that something broken in this reality will become something whole in the alternate reality and since this piece of spruce is in the “heart” of the hoop—the bones of this drum will mend a broken heart. 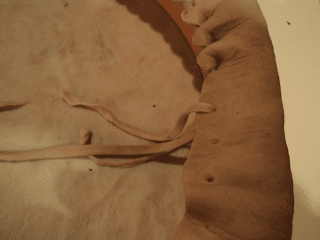 I am superstitious about counting the number of holes in the rim of the drum skin, especially since this number in turn controls the number of thongs that tie into place the inner ring.  Some fundamental meanings of the symbolism in a drum have to be left to the drum itself to determine. 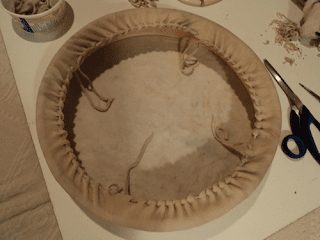 The 4 directions and the 4 solar holidays of equinoxes and solstices appear in the lacing that ties the drum head to the hoop—and therefore ties the voice into the drum.  I sometimes tie on a drum head with 3 thongs for the three lunar seasons, and sometimes 5 for the five kinds of time. 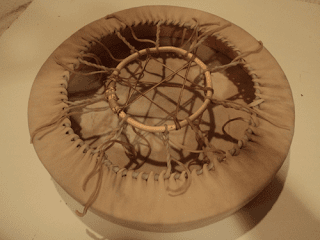 This inner ring of this drum became tied with ten thongs which in the Tarot is the number of manifesting success through perseverance on this earthly plane. The person who commissioned this drum wanted the inner ring filled with the magic hexagram, a symbol of protection, because it offers no “gates” through which an evil spirit might enter.  .  The broken rim wood, number of thongs and pattern of lacing in the inner ring now make another layer of symbolism in the drum.  The drummer holds the sign of protection, which extends outward in rays of success, to a strong heart in the spirit world. 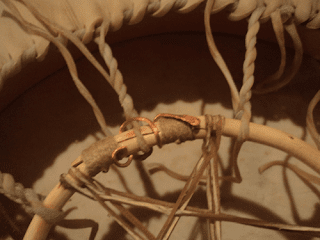 Some meaning of symbolism in a drum is just for me.  Many years ago I had a ring break after a drum had dried, and the special skin presented to me by a MicMac elder could not be re-soaked for repair.  Soon after this I lifted a wounded snake from the road to a warm, round rock in a mossy bank. The snake opened its mouth wide and held my gaze, and I saw the snake as if on the surface of a stone drum, wrapped around the holding ring.  Although that drum, and the snake, died—ever since I have honored their teaching by securing the cedar ring with a copper snake. 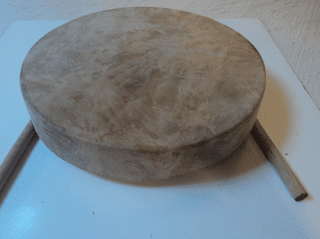 All of the symbolism in making this drum disappears beneath the rim as the drum dries.  But what appears is even more magical.  Now the never -before -seen faces and forms of creatures begin to emerge in the patterns of the drying skin, and the drum transforms into a journey oracle of the spirit world adventures which await the keeper of its voice.


Posted by Kristen Scholfield-Sweet at 5:14 PM