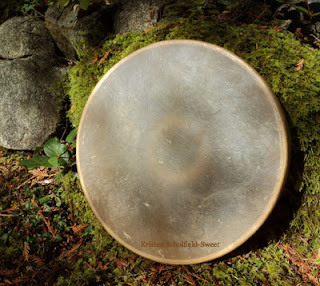 This new shamanic drum is called many families. It is a clear deep gold, so transparent that whatever is near the drum becomes part of its face--part of its family. This 14" hoop drum was recently made at a drum workshop here on Cortes Island where two deer hides from a local hunter and several hoops made from local spruce were equally prepared by everyone. It is interesting to me that as all of us worked on both skins without having preferences or prejudices for what hide would eventually belong to which drum maker--the two hides became more and more clear, as if not claiming ownership caused the drum skins to keep releasing what would muffle the voices that were coming. 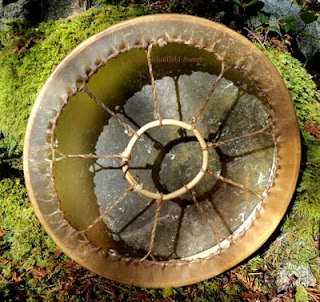 Throughout the three days it took us to prepare the skins to be stretched across the frames we were each careful to keep taking turns with every task on each skin. When it was time to cut out the drum heads we let the hides choose the drums they would become, because of course each drum pattern fit best in one area of the skin but not in others. In this way we never imposed our desires on the process of making the drum, but let the process reveal each drum's best fit to us. I feel this is why this shamanic drum has such a generosity of clarity. It has only ever had to be itself, and therefore we can each see ourselves in its face. 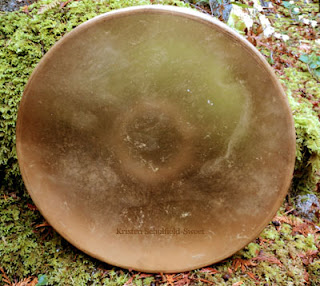 THIS DRUM HAS BEEN SOLD